You are here Product / Project Samples / Designed at Formula 1 Speed

Twelve months to build a new, state-of-the-art Formula 1 circuit – can’t be done? Yes, of course it can! - Thanks to the company Bickhardt Bau AG from Kirchheim, Germany, which built the new Formula 1 Mecca in Abu Dhabi. They are specialists in building racing tracks and transportation routes and were awarded the contract to build all subbase and asphalt layers of the racetrack as well as the peripheral area.

This very demanding Formula 1 circuit, partly located on an artificial island in the Persian Gulf, was built within this extremely short time span. Hermann Tilke, the renowned Formula 1 racing circuit designer from Aachen, Germany, once again showed his expertise. 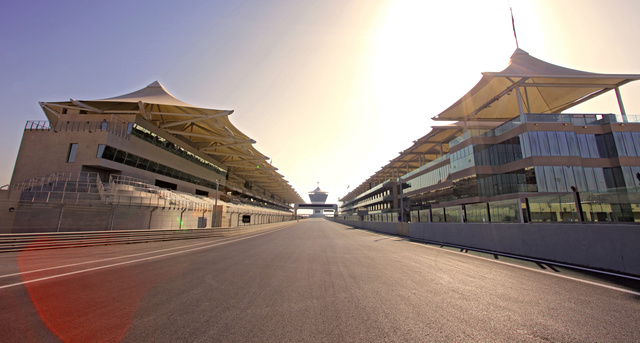 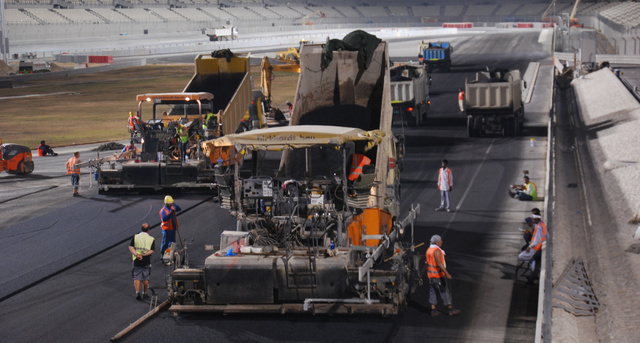 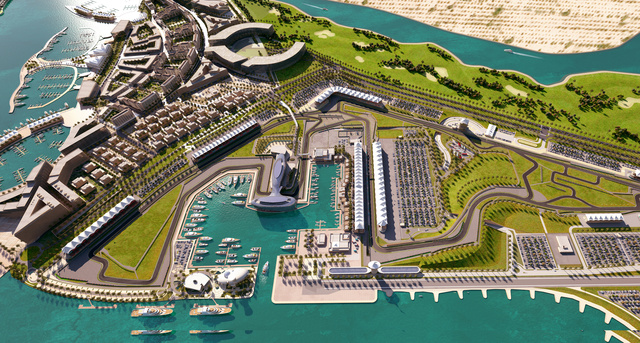 Perfect for speedsters – no annoying seams between the various asphalt lanes, the bituminous special mixture provides adequate grip for the racing tyres.
The pavers and the steel drum rollers were in action day and night.
Brand new “Vögele” pavers and six state-of-the-art steel drum rollers were specially sent from Hamburg by container ship.
With its 5,532 metres, the 12-15m wide racing track is longer than usual and sports some 20 spectacular bends and curves.

With its 5,532 metres, the 12-15m wide racing track is longer than usual and sports some 20 spectacular bends and curves. The racing track’s orientation is anti-clockwise, like in Istanbul and Sao Paolo. A maximum of 320 km/h is possible on the track’s high speed section. Nearly one million tonnes of subbase material and 200,000 tonnes of asphalt had to be laid under extreme climatic conditions by the 25-strong team comprising project managers, installation managers, site managers, surveying engineers, laboratory assistants and machinists. 15 local employees assisted the team from Germany.

Brand new “Vögele” pavers and six state-of-the-art steel drum rollers were specially sent from Hamburg by container ship. There was a very high quality benchmark to be met. The maximum tolerances along a 4 m-long track section should not exceed 2 mm. Three offset pavers laid the special asphalt in the so-called “hot on hot” paving method; here the specialists of Bickhardt Bau’s subsidiary MKW based in their on-site lab were responsible for the production and quality control. As the stone material from Abu Dhabi did not have the required properties, crushed stone had to be imported from Malaysia and England. “The stone’s hardness and the special grain sizes, in combination with the special bitumen, provide the grip required by the racing cars’ tyres”, according to Kai Wörmann, mixing plant specialist.

The finished track’s top quality is the result of the highest precision, expertise, commitment, state-of-the-art technical equipment and years of experience in building various racing tracks: such as the Sachsenring, the Porsche testing track near Leipzig, the Hockenheimring racing track as well as asphalt work on the Formula 1 racing tracks in Bahrain and Shanghai. But, of course, all this needs a sophisticated design program to turn the architect’s racing track design data into reality. The entire project was completed in Kirchheim using card_1 by our employee Frank Straub, who sadly died in 2009. Any changes, even those given at short notice, could be smoothly incorporated into the project and sent to our on-site surveying team supervised by Markus Boländer. As with other projects, the digital terrain models in combination with the construction machine guidance systems were vital to quickly and precisely lay the substructure.

As in any sport, it was the team spirit of those involved in the project which helped to accomplish this huge task in such a short time frame. Following the first race, which took place as planned in the capital of the United Arab Emirates on 1st November 2009, Abu Dhabi was once again the host of the final race of the 2010 season.

The Formula 1 world championship closed with the desert Grand Prix on 14th November 2010.