You are here Product / Project Samples / Abu Dhabi on Track

The Department of Transport (DoT) has now given the design phase of the Abu Dhabi rail project the green light. The first construction phase will involve a two-track network for the Metro, two tram lines and an express bus route. The DoT is using the current card_1 Version 8.4 to check the line routing. 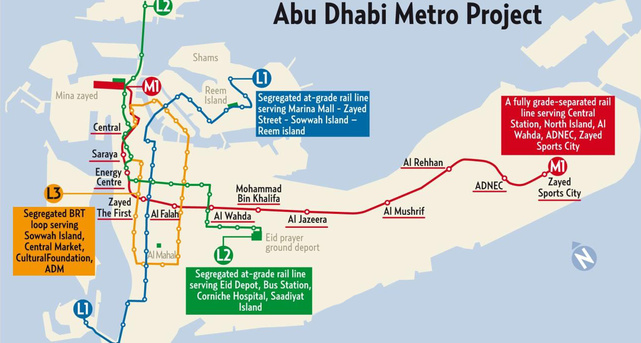 There will be 18km of Metro to start with stopping at 12 stations. The DoT's priority was for the Metro Zone to cover areas with high passenger density and heavy traffic and environmental load due to exhaust fumes. The Metro will achieve speeds of up to 100 kmph between stations. Abu Dhabi will also get a tramline (Light Rail Transit) and an express bus route (Bus Rapid Transit). The light rail project will initially have two light rail/tram lines covering 28.5km with 45 stops. The express bus line will be 14km long and have 25 stops. The projects are scheduled to start operating in 2018 and 2020 respectively.

The project's first phase, once up and running, should greatly reduce Abu Dhabi's daily traffic jams making life much easier for drivers. The DoT also hopes that by building sustainable traffic infrastructure it will both support environmental concerns and have a positive impact on the cultural, social and economic life of the country.

The DoT's Masterplan (STMP) 2009 entails a Metro network of 131km by 2030 and a further 340km of tramline. In order to highlight the projects' necessity, in 2010 the DoT awarded planning contracts to two joint ventures: ADAPT and SENER-TYPSA. ADAPT brings together two American and one German company: AECOM, an international provider of transport consultancy services; Parsons Brinckerhoff, an equally global player in infrastructure planning; and Deutsche Bahn International. The other joint venture, a collaboration of two Spanish planning offices, was awarded the task of pre-planning the light railway projects. By the end of 2011 ADAPT and SENER-TYPSA had completed their feasibility studies and preliminary designs and were able to propose starting first phase of construction. Both joint ventures are currently working on the designs for the Metro, tramlines and integration of the Bus Rapid Transit. The DoT hopes the tender documents will soon be released and construction can get underway. In order to check that the joint ventures' routeing specifications are up to the standard of precision required by the DoT, the Norderstedt surveying and design software, card_1 is being used.

Abu Dhabi's long distance railways are getting on track. The city has hired Etihad Rail Company, developer and operator of UAE's state railways to build and operate the national passenger and freight rail network. This will mean approx. 1400km of track stretching from Ghuwifat on the Saudi Arabian border via the Ruwais industrial zone in Abu Dhabi to Saqr-Hafen in Ras Al Khaima. The plans also link the emirates Dubai and Fujairah into the network. Construction on the first phase has already started and the second phase has been put out to tender. Once operational, goods trains and passenger trains will travel at 120 kmph and a maximum of 200 kmph respectively. The aim is to link the various regions with a safe, efficient and above all, environmentally responsible means of transport.