You are here Product / Project Samples / New tram link: from Halle to HaNeu

Building an east-west tram line which connected the suburb of Halle-Neustadt to the city centre as well as to the existing tram network was the ambitious public works project of the city of Halle/S. Project work began in 1996 and accompanied construction work until 2003. 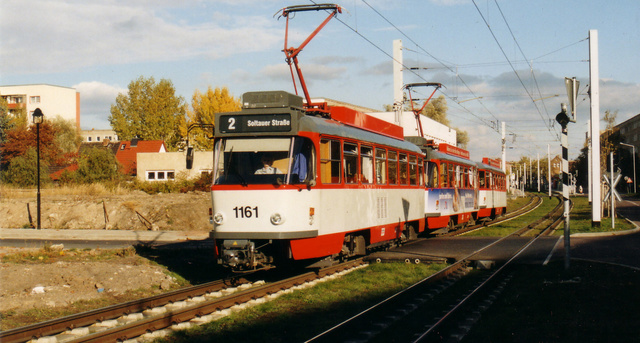 On both sides of the two-track tram route running down the middle of the main road, the carriageway, bike lanes and footpaths had to be completely redesigned. The following demands were placed on the new tram line: connect the main railway station directly to the tram network; separate the tram traffic from any individual motorised traffic in the Riebeck-Platz area; improve facilities for changing trams at intersections; and ensure that target destinations are easily reached.

With its various modules the card_1 program packet was ideal for this task. The swept turning path calculation was used intensively for each intersection. The colour depiction of the various turning paths in the detail plans alone was extremely helpful for the various public authorities when voting. The close connection between the digital terrain model, vertical alignment and cross-section modules made for seamless work.

Plans from third parties, such as connection plans, were easily imported into the project via the interfaces DXF/DWG. The excellent layer structure, in particular, enables card_1 to create special plans with differing information. In this way, the information could be easily selected while the plans were not overloaded.