A7 Roadworks – A Noise-Lid on Hamburg

The A7 in west Hamburg is an inter-regional north-south route, connecting, along with the A23 motorway, the city of Hamburg, the airport and the shipping port. It’s one of the most heavily used sections of motorway and goes through densely built-up parts of Hamburg, running from north of the Elbe River-tunnel up to the state border of Hamburg/Schleswig-Holstein. 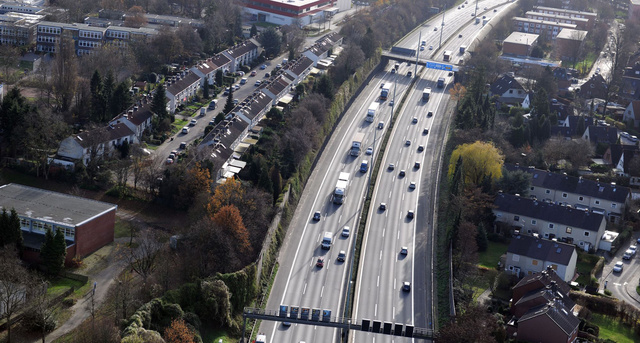 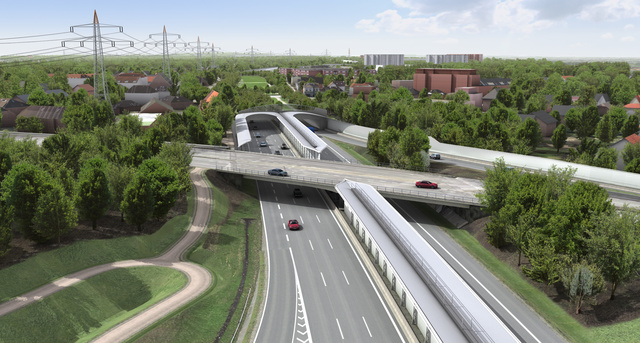 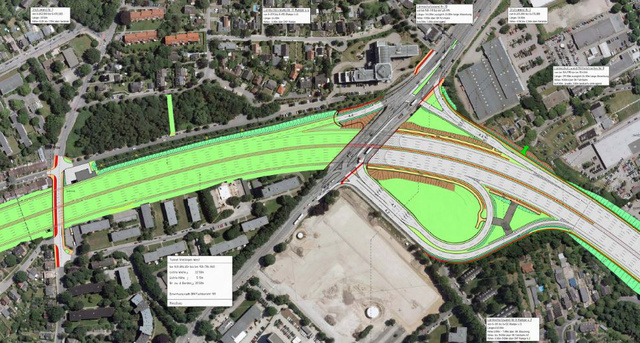 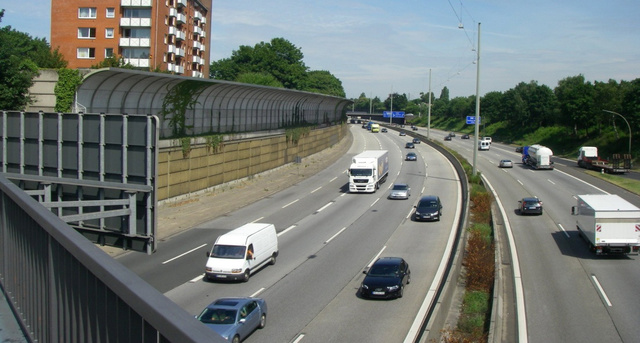 Current traffic forecasts classify the 8-lane extension as an “urgent requirement” based on an estimated traffic volume of 147,000 vehicles/24 hours by 2025 for this section of motorway. In order to cope with the growing volume of traffic and better regulate the flow, capacity must be increased by building additional lanes. HGV traffic accounts for a large percentage of the A7’s total traffic volume. A traffic control system to manage speed will therefore continue to be used along the entire section and will be adapted to suit the new conditions as part of the construction project.

BUNG Ingenieure AG has been working on part of the A7 since 2007. The motorway section under discussion is 4.2km long, beginning at motorway junction HH-Nordwest and terminating south of junction HH-Volkspark. Plans include widening the motorway from 6 to 8 lanes between junctions Hamburg-Volkspark and Hamburg-Nordwest and from 4 to 6 lanes north of the A23 exit towards the town of Heide at junction HH-Nordwest. The engineers were tasked with the work phases of design, approval and execution (work phases 2 – 5) for the planning of traffic systems. The motorway will be surfaced mainly with porous asphalt (PA).

The designs of both the drainage and the new routes in this traffic system were planned using card_1 software, in which the initial drafts, final design and approval planning were completed using version 7.7 and the execution planning was done with version 8.2. The task was challenging due to the number of constraining points that needed to be taken into account in all 3 dimensions, a major contributing factor being the existing residential areas.

Moving the route was not an option as the tight succession of junctions had to be heeded, and the adjacent buildings meant that only spot improvements to the motorway route were possible.

The carriageways will be extended using the standard cross-section RQ 43,5, each with an additional auxiliary lane. This results in a width of 22m for each direction, or even more in those areas with on and off slip roads.

When planning the route the existing junctions of HH-Stellingen and HH-Volkspark were to be re-connected and widened in such a way that the surrounding road network may benefit from the improvement in the junction’s capacity.

A Cluster of Constraining Points

The design was also made more complex by the need to factor in two closely following overpasses, the construction of a new bridge for a freight train bypass track and the prevailing groundwater conditions. This meant examining a number of vertical alignment design variations. It was also necessary to work with two separate vertical alignments (one vertical alignment for each direction) because of the plan to construct a noise protection tunnel.

At the core of the project is the approx. 900m-long Stellingen noise protection tunnel. Within the context of designing traffic systems, such a structure had to be examined very closely. During this time, engineers at BUNG were already working on the preliminary designs for the tunnel. This allowed the interface between the structure and the route to be scrutinised and then taken into account when planning the cross-sections. This is how the cross-sections, complete with actual tunnel geometry, were generated. They were based on the geometry present at each chainage along the carriageway (cross-falls, vertical alignment heights, widths).

The inner and outer dimensions were produced with the help of card_1’s Cross-Section Developer. This brought many positive side effects. The engineers were able to pinpoint the actual heights and place them in relation to the surrounding terrain. It also allowed the cross-sections to be used as a basis for simulated test drives of the tunnel in order to check safety parameters, as stipulated by the client DEGES. Cross-sections were also used to generate a DTM, which was in turn used by the city of Hamburg to design its “noise lid”. These plans even include niches in the tunnel’s top slab for future fixtures such as ventilation systems and signposting. The cross-sections were equally useful as a means of presenting the project to the public as part of the civic-involvement programme.

In the course the construction works, the entire drainage system will be re-developed and controlled with the help of four rainwater retention basins. A total of five drainage networks were designed as part of the sewer plans, complete with data on catchment areas and surfaces. The hydraulics were also calculated. Drainage is achieved either by gullies, or in sections with minimal gradients, by trough gutters. The card_1 Sewer Toolbox was used in each phase of planning the drainage facilities, in the cross-section, base map and elevation views.

The plan is to keep three lanes in each direction open, diverting it in a "6+0 formation" around the construction site for the duration of the project. This requires the planning of provisional widenings of the existing carriageway and building temporary lanes to cross the central reservation as well as temporary on and off ramps as required by the stage of construction.

Updating to Version 8 – the Right Decision

The technical migration of the project from Version 7.7 to Version 8.2 went off without a hitch, with none of the dreaded data loss. The biggest challenge facing the design engineers was to familiarise themselves with Version 8’s structure as quickly as possible. The main difficulties lay in heeding the altered syntax when writing development files: what one little comma or full stop can do! This was only a problem at the beginning however, with the correct decimal point becoming routine in no time. It soon became apparent that the decision to update was the right one. New tools were available and even the swept turning path calculation, or related output options were easier to use, clearer and more flexible.

The extensive graphic editing of the plans – with the exception of cross-section drawings – was carried out with AutoCAD®. The reason for this lies in the fact that the documents had to be produced and supplied in the complex, pre-determined layer structure stipulated by the client. The designs were exported as DXF/DWG data by means of the export interface from card_1 to AutoCAD®, where they were then finalised.

One of card_1’s greatest strengths is its unlimited capacity to generate cross-sections with all possible cross-section elements. With complex and corresponding cross-sections in particular, this quality is especially noteworthy. The project will be completed in stages over the coming years, with comprehensive construction site and traffic routeing logistics essential. With the noise protection measures, the improvements to traffic flow resulting from the plans to widen the carriageway and the upgrade of equipment with the most modern telematics and safety technology, the A7 motorway is being made fit for the future.